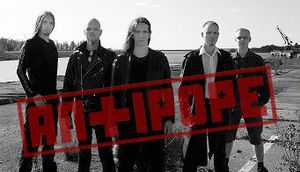 Iconoclastic by nature Antipope pushes the boundaries between heavy metal and extreme metal. Antipope was formed in Oulu, Finland by Mikko Myllykangas (guitars/vocals), Santtu Heinilehto (bass) and Jyri Palmu (drums) in the year 2004. Shortly after the formation an EP "Scorched Heavens" was made in the Autumn 2004, consisting of the first three Antipope songs "Godmade Abyss", "Scorched heavens sunset" and "To Bring Down the Blessed Mother". EP was never officially published. Antipope existed as a trio for little over a year until in the autumn of 2005 Juho Rikberg (ex-Disaster, ex-Jeesuksen Ryhti, ex-Catasthrope) took the responsibility of another guitarist. Need for another guitarist had risen once the band began to consider taking steps to perform live - after positive feedback from those who had heard their home-made recordings - although the band originally did consider themselves as only a studio group. By the end of the year 2006 Antipope compiled the material they had written so far on a CD Apostate Angel which has been distributed to friends and fans. Up to this point Antipope could have been described as a black metal act showing some progressive influences. Antipope did their live debut in November 2007 and returned on the stage a couple times in the spring of 2008. After a few gigs the band decided to sharpen the live edge by adding second guitarist to the line up. An old friend of Mikko and Sattu, Antti Karjalainen, became the fifth member of Antipope in April 2008. In the summer of 2008 Antipope were faced with a tragedy when Jyri Palmu, the drummer of Antipope, died from heart failure due to his inborn heart condition in June 2008. After a couple months of intense searches and auditioning Antipope found a drummer who could fill the Antipope line-up and Tuska E. (ex-Revenant, ex-Nidhug) joined the forces by the end of August 2008. In September of 2008 Antipope released Chaosmos EP. Chaosmos remains the last recording of drumming by Jyri Palmu and in many ways marks and end of an era and a beginning of a new one. Chaosmos earned positive and – not surprisingly – confused feedback from the media. Antipope’s original approach to extreme metal gained praise and irritation as well. Quickly after completion of the line-up Antipope wrote new songs and recorded what is now released as Excessive Use of Faith EP in the winter 2009. Tuska E.’s energetic drumming pushed the band to more groovy direction creating the strongest release by the band so far. In the spring and summer 2009 Antipope played gigs, most notable performance being in the Jalometalli 2009 after party alongside Finnish black metal excellence Enochian Crescent and others. In the summer 2009 Mikko and Juho started to write new material for what was to become the first official full-length by the band. Between November 2009 and February 2010 the band recorded nine new songs that form Desert LP. Desert carries on from where the latest EP left and goes further into mixing extreme metal with heavy metal. However, Antipope did not just refine what they had done so far. On Desert the use of synthezisers is more immanent, which makes the atmosphere of the album more intense. After finilizing the album Antipope began to look for a publisher for the album and has promoted Desert on gigs and in internet. There has already been some talk about the follow-up to Desert. The future looks blasphemous.