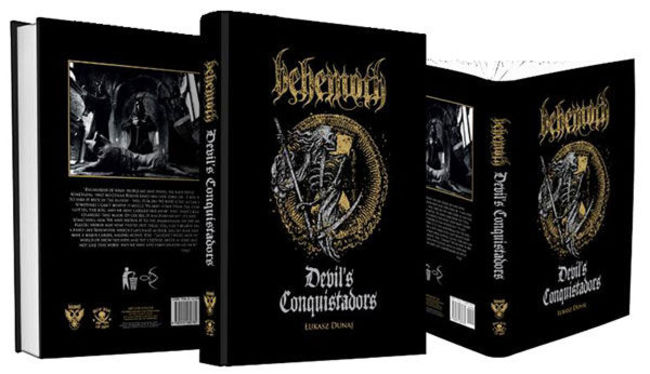 "We went to a park in Brzezno – there are some old German bunkers from WWII there. Nergal, Baal, Frost and me – I was supposed to take their photographs in full gear. We were lighting the place with the headlights of Frost’s Lada – the only lights we had. To spit fire, we used refined benzine – we had tried that before but we never truly realized how flammable and dangerous it was. Baal wanted to spit fire, like on the cover of ‘The Return of the Northern Moon,’ but Nergal, perhaps a tad jealous of his fame, grabbed a torch from him and said: “I’ll spit now and you’ll go next” or something like that. The way to do this was to take some benzine in your mouth and spit it out from a distance on a burning torch – what you got was a very cool ball of fire. You could do it with naphtha but that day we only had that purified benzine. So Nergal spat but I think he was holding the torch too close ‘cause the ball of fire sort of blew back and in a second his hair was on fire! He panicked and started tossing – I had this thought for a second that if he runs into the forest then we’ll never be able to stop him. So we surrounded him, put a jacket over his face, and pushed him to the ground. Just to extinguish the flame. Then we went back to our basement right away to see what his face looked like and whether he was badly burned. We were all pretty shaken-up. One of us said to Nergal, “F–k, you have no face” and he started screaming and asking to take him to a hospital but he had all the make-up and pentagrams and s**t. I mean, how do you explain that? So I went home and told my mom that a friend got burnt – she gave me some butter. Some old folk method. We smeared the butter all over Ner’s face so that he wouldn’t take off the paint together with the skin.

Nergal adds to the story:

Everything on my face that sticks out was burnt – forehead, nose, cheeks. My skin was covered with little blisters and it burned like hell. I went home – this was back when I shared a room with my grandpa. I went into the bathroom and looked at my face – red all over.

My hair looked like after some explosion – a burnt afro style a la Jimi Hendrix. I sat in a bath and was completely broken. Somehow, I tied the remaining hair, washed, put butter on my face, and went to bed. It was dark so my grandpa didn’t see anything. To make matters worse, it a hot June night and butter immediately started to run down my face. It was a disaster. In the morning, my parents went to work and I put band aid over burnt places – my face was almost completely covered with them. When my mum came back, I told her I was in a fight. She wasn’t very upset. After a few days, the burns started to scab – I was really a sight! I couldn’t let my hair down for a few months – I had to wait until it started to grow back. I didn’t look particularly dark then. I was really lucky my skin regenerated and I didn’t have any scars. Of course, we analyzed what I did wrong. I still occasionally spit fire but usually it’s Inferno’s spiel. He hates it, though – the taste of naphtha is really awful.

Finally, Nergal recalls the interesting reason why guitarist Frost was wearing a hood during the From the Pagan Vastlands photo shoot:

When we were going to shoot those photos, we waited for Frost for a long time. We even expected that he wouldn’t turn up. He did, finally, but he was subdued and weird. And he was wearing a hoodie. When he took it off, it turned out he was completely bald, which was unacceptable back then. It turned out that that he was dealing a bit on the side and when his father learnt about it, he simply shaved his head! Like a sheep. The ‘From the Pagan Vastlands’ demo did not feature the title track, which only appeared on the debut album and is the only composition from the early period of the band’s history that has remained on the concert setlist until today."