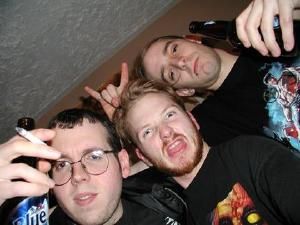 Originally formed under a different name during the mid 1990''s, Cephalectomy went through several line up and style changes before finally coming together in 1998 as a solid project. Drawing from a variety of extreme styles, including death metal, black metal and grind, the band released their first demo, entitled Gateway to the Gods, in 1997. At this time, the band''s line up consisted of vocalist/guitarist Corey Andrews, bassist Jason Nichols, and drummer Clayton Horne. Horne was soon afterward removed from Cephalectomy due to lack of interest and evil spirit, but the "Gateway" demo generated enough interested to motivate the band to carry on. After an unsucessful attempt to add a new drummer into the mix, they finally decided on becoming a two man project and in 1998 self produced their second demo, "Dark Waters Rise". Dark Waters Rise, although suffering from weak production, turned out to be a vast improvement over the previous demo, and met with a fair amount of enthusiasm from listeners. Injected with mystical/Lovecraft inspired themes, Cephalectomy''s unique style, eventually refered to by some as "Mystigrind" - resulted in their signing to Discorporate Music in 1999. On 2000''s Sign of Chaos, Cephalectomy''s first full length recording for Discorporate, the band continued onward in their persuit of chaos, brutality and necronomic melody. Four years would pass before Cephalectomy would release their sophomore album Eclipsing The Dawn. The album proved to be above anything the band had produced to date, earning both critical praise and an international audience. A gore-themed split cd with the band "Bound In Human Flesh" followed one year later. In 2008 Cephalectomy unleashed yet another release, an ambitious, single-track EP entitled The Dream Cycle Mythos. A release the band felt was fresh, true to their style, and exhibits their best work to date.