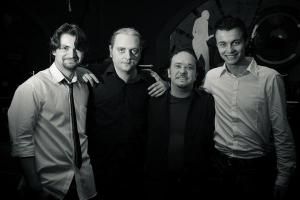 Hot Club de Bucharest is a manouche jazz band that was formed sometime in the Months of February - March of 2008. It came to life through a series of fortunate events, under the careful observation of Malin Cristache, first guitar and leader of the project. Although, at first the membership of the band was somewhat unstable, things have settled in time and a solid quartet emerged: Malin Cristache - guitar, Florentin Emilian - guitar, Dorian Alexandru - violin, Andreas Aron - double bass. Hot Club de Bucharest had its debut concert on the 14th of April 2008 in the La Scena club. From that night forward the band went on to play some of the most important jazz venues of Bucharest, including playing in the opening of the Green Hours Club Jazz Festival in May of 2008, as well as the Anonimus Film Festival in the Danube Delta, and other reputable stages such as the Throne Room in the Royal Palace of Bucharest. At the moment the band is playing in Bucharest, collaborating with appreciated clubs of the city, such as: Green Hours, La Scena, A''live (Ex Cotton Club), and others. The energy of this particular style of jazz combined with the enthusiasm of each band member makes for a unforgettable night out, and the "feel good" vibe lingers even after the music dies down. Malin Cristache - leader, guitar Alexandru Dorian - violin Florentin Emilian - guitar Andreas Aron - double bass MySpace: http://www.myspace.com/hotclubdebucharest LastFM: http://www.last.fm/music/Hot+Club+de+Bucharest Facebook: http://www.facebook.com/home.php?#/pages/Hot-Club-de-Bucharest/91427628528?ref=mf http://malincristache.com/