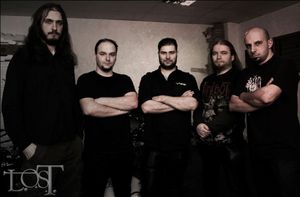 Having a vast experience on the Romanian scene, of almost 20 years, which contained, among others, numerous festival awards, radio and tv appearances and 2 albums recorded with Abigail and Cronos, L.O.S.T. succeeded with its main objective, a fast impact on the underground scene, with excellent live shows and with a growing mass of devoted fans.

With the occasion of the debut show in Bucharest on November 5th, 2004, it was also released the first promo cd, of a great sound quality and artwork. The promo material is entitled “Ziua ce vine” and consists in 2 tracks (“Ziua ce vine” and “Last Breath”), recorded at Recreate Studio from Bucharest between October-November 2004. The band recorded a total of 5 tracks, which were released by Meta4 Productions as an MCD named “Last Breath” on March 4th 2005 and it had nationwide distribution.

Recently the band finalised the work at the new L.O.S.T. entitled “Remains of Pain”. The material was produced by Razvan Alexandru from Abigail, recorded in several locations (including Musitech Production Studios and Taine Multimedia Studio), mixed at Moon Studio and mastered by Alan Douches at West West Side Music, New York, engineer that also worked with Six Feet Under, Hatebreed, Cattle Decapitation, Cannibal Corpse, Kataklysm and many others.