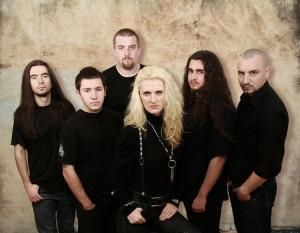 The band came into existence early 2008 when guitarist Bogdan Stanciu met clasically trained pianist Bogdan Otta. At the time,they performed in quite different acts - B.Stanciu playing in tech-thrash metal band Bruma (with S. Dimidof and L. Anghel) while the other performed in various jazz/classical surroundings. Finding a common source of interest and inspiration,they decided to fuse Bruma''s heavy metal vocals and twin guitar attack with Bogdan''s rich,classically inspired orchestration and knowledge of musical form (most of the attached songs are written in the Classic Piano Sonata formula - consisting of A-B-intermezzo-A-B-end. The band''s name comes from the greek word ''λαμβάνω" which literally translates into ''taking hold of'' and "νεύρον" meaning ''nerves''. Neuroleptics are a type of highly powerful psychoactive drugs used in the treatment of severe mental illness. Althrough considered highly dangerous, these drugs are somewhat indispensible. And it is the band''s point of view that such a name symbolises numerous situations in an individual''s life - a “necesary evil”, a sacrifice that needs to be made in order to acomplish a certain goal.