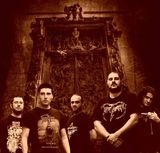 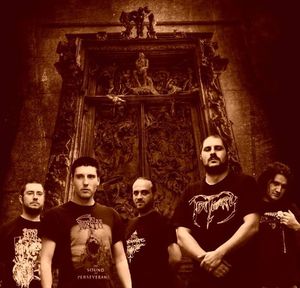 Sincarnate Sincarnate is a Romanian death/doom metal band, formed in Bucharest in 2005. To date, Sincarnate has released one EP and one full-length record and is regarded as one of the representative Romanian extreme metal bands.

Sincarnate was founded in the capital of Romania, in the fall of 2005, by Dyo as a guitarist and Marius, playing bass guitar and handling the vocals. Shortly after, the second guitarist, Enthroll (former bass player for the Romanian black metal band Man Among Stars), joined the band, together with Gigi, as a drummer. The initial line-up was completed by Cristi, managing the keyboards and Razvan on the bass guitar (meanwhile Marius decided to concentrate on the exclusively on the vocals). After several months of rehearsals Sincarnate opened a club concert organized by Axa Valaha Productions.

2006 and 2007 were years of consolidation, with several live concerts held in Bucharest. In this period Sincarnate started writing the songs for the first material, intitled „On the Procrustean Bed”.On the Procrustean Bed was recorded in the spring of 2007 at the Taine Studio in Bucharest, the cover being designed by the British artist Vincent Chong. Sincarnate agreed with Axa Valaha Productions to release it in the following spring. On the Procrustean Bed will come out of the press on the 2nd February 2008, the release being followed by a tour that included concerts in Romania, Bulgaria and Moldova.

On the Procrustean Bed was well received by the local press and received international positive reactions, songs from the EP being released on compilations by magazines like Ancient Ceremonies (POR) and Brutallica (BUL). Reviews of the material were featured in publications or zines like Metalfan, Metalhead, Metalact, Bang Your Brain, Metal Assault, Kogaionon, Vampire Magazine, Vampirezine, Necroscope Metalzine (POL), and many others.

Meanwhile the second guitarist, Enthroll, leaved the band, because of his definitive relocation to Italy. Several months later, Marius had to relocate also, for professional reasons, to Cluj, a city in the north-west of the country. The distance forced the remaining members to look for replacement, despite Mariuses commitment to continue working with the band.

Fenrir (guitarist and former member of Man Among Stars, where he was playing with Enthroll) and Fane (vocalist, former member of DinUmbra and MG42) joined the lines of Sincarnate, which allowed the band continuing playing live shows but also to pursue its creative work. In this line-up Sincarnate continued to have a solid live presence on the local and neighbor country stages.

Fenrir and Fane decided to leave the band in the spring of 2008 and founded shortly after the suicidal black-metal band Kistvaen. The next two shows (Bucharest and Timisoara) lined up again and for the last time the original line-up, as Enthroll and Marius agreed to help temporarily the band with the live apparitions. After these shows, as Marius stayed in the band as a permanent member, a second guitarist was found in the person of Nicu.

From that point on Sincarnate sustained a lot of shows within and outside the Romanian borders (Germany, Slovenia, Poland, Moldavia, Bulgaria). The most worthy to be mentioned were: the opening show for Moonspell in Bucharest on the Mihai Eminescu Arena, the show at the Artmania Festival 2008 in Sibiu (where Sincarnate shared the stage festival with bands like Tiamat, Atrocity, Lacrimosa and Agua de Annique), the participation at two consecutive edition of the Moldavian Brutal Attack Fest in 2008 and 2009, and the participation at the Dokma Film Festival 2009 in Slovenia.

The last two months of 2009 found Sincarnate in the studio, recording the first full-length, named As I Go Under. Summing up not less than 01:07:05, the opus was recorded in Bucharest, mixed and mastered by Jeremy Krull at the Strategic Sonics Doom Room in Chappaqua, New York, USA during January – March 2010. The concept and graphic design has been conceived and executed by the well-renowned plastic artist Costin Chioreanu (twilight13media). Meanwhile, Sincarnate headlined the Gahlen Moscht Open Air Festival 2010 in Germany.

Sincarnate second recording and first full-length material As I Go Under was released by the romanian label Hatework on the 31st of October 2010 and launched within the Hatework Festival 2010, where Sincarnate shared the stage with Illdisposed, Obscura, Sear Bliss, Dordeduh, CapDeCraniu and Malpraxis.

In the spring of 2011 Razvan, the bass player, left the band, for a spiritual journey that will take him to Japan. His place was filled in by Andrei, a former member of the Romanian black-metal act Eternal Fire.

After the departure of the second guitarist, Nicu, and the drummer Gigi, Sincarnate started looking for replacement, continuing to work for a future release. Cristi (who inbetween started his collaboration with the Romanian doom/death bands DinUmbra, as guitarist, and Abigail as a keyboard player) decided to take on the empty guitarist slot, and Flo, former drummer of Necrovile and leader of the Romanian brutal-death band Malpraxis accepted to join the band, allowing Sincarnate to continue its concerting.

In 2013 Sincarnate focused on composing material for the next recording, sustaining only several shows on the local scene, in Bucharest, Bacau (where Sincarnate opened for Agathodaimon and Cluj. The series of concerts came to a stop as Flo had to return to his home-town, Sincarnate finding a replacement for the drummer position in the person of Herod.

After opening the concert in Brasov for Nargaroth and a concert in Timisoara (held with another band from Hatework''''''''s rooster, Decease), Sincarnate started preparing the recording sessions for its next material.

Sincarnate just finished the filming sessions for their first official video, meant to announce their next recording, which is planned to be released in this fall. Filmed in Brasov and produced by the well-known Romanian artist Costin Chioreanu, the video will describe his surprising vision on one of the songs included in the future Sincarnate material, entitled “Nothing Left to Give”.