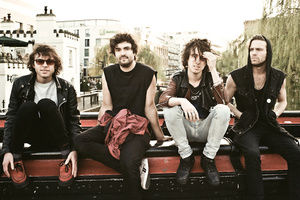 In April 2011, Tribes released their first EP titled We Were Children. The music video for the song "We Were Children" was filmed in Camden Town, with the band performing a rooftop gig to onlookers and fans on the street below. The song was named "Hottest Record in the World" by Zane Lowe on BBC Radio 1 on 14 April 2011. "Sappho", the first single from their upcoming debut album, was made available for download on 11 July 2011. The band performed a session at the BBC Maida Vale studios as part of the BBC Introducing project in July 2011. Tribes played Underage Festival and Field Day Festival in Victoria Park, London in August 2011, as well as Summer Sonic Festival in Tokyo. In addition, the band closed the summer by playing Reading and Leeds Festivals, Freedom Festival, Jersey Live and Bestival and a set at latitude festival. The band have also been announced as main support to The Kooks on the UK leg of their upcoming Autumn tour, and for the European leg of the Kaiser Chiefs tour in November 2011. In between, they will headline their own 9 date UK tour. The band have been confirmed for XFM''s Winter Wonderland 2011 gig at Brixton Academy on the 15th December along side We Are Augustines, Ben Howard, Miles Kane, The Maccabees, The Horrors, a special guest and the Kaiser Chiefs. Following this they have been announced for the NME Awards 2012 Tour with Azealia Banks, Metronomy and headliners Two Door Cinema Club. They state their influences as Nirvana, Pixies, Pavement and REM. Their debut album, Baby, was released on the 16th January 2012.