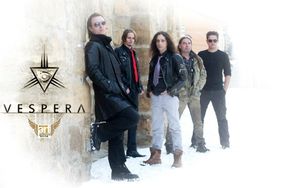 In 2005, Dorin Panduru and Vlad Popovici, two musicians from Cluj-Napoca, start a new musical project that aims to promote a different kind of musical mix, more specifically power-goth. This represents the birth of Vespera, a band which later enrolls Andrei Călbăjos (keyboards), Flaviu Sătmar (drums), Vlad Negrea (guitar) and Teodora Bârla (vocals). They make their debut on November 24th, 2006, sharing the stage with Voices of Silence and Grimus. After this moment, new horizons open for the band. Cash, Trooper, Seven, Altar, Shadowsail, Abigail, Krypton are few of the names with whom Vespera plays in concerts all over the country. In 2007 Vespera opens for the Dutch band Next Waste Dimension in Sibiu meets Deventer event. The end of the same year represents the moment when the first demo of the band, Vespera, produced by Tibor Baszo (Alias Music), is released. The following year, Vespera wins the first place in the Maximum Rock – Suport pentru Underground contest and Festival, with their Mary of Bethany. After that, Vespera starts touring in Iaşi, Suceava, Paşcani and Bacău, alongside two other bands from Cluj-Napoca, Stereofeelings and All One, with whom they share a compilation containing a few songs of each band. The band decides to take a break, in order to prepare for their debut album and also due to numerous changes of band members. Thus, 2011 brings the release of Desert of the Real, with the help of Tibor Bazso (Alias Music) an album considered to be unique in its ability to mix a wide variety of musical genres, ranging from industrial, electro and hardcore to death metal and even oriental: The album released by Vespera is far from sounding like a typical debut album. Moreover, it would be great if other debut albums belonging to other bands sounded as good as this one (…). The album is very complex and the songs well-built, and it is a real reward for the band as well as a step forward in their career. (Ioana-Cristina Teodorescu, in ArtAct Cluj, 31 Oct 2011). Right after the release of the album, the vocalist Teodora Bârla decides to leave the band and her absence is filled by Dudu Isabel. In 2012, Vespera wins the gand prize of Posada Rock Festival (Câmpulung Muscel), thus qualifying in the GBOB România final. Due to personal reasons, one of the co-founders, steps out of the project for an undetermined period. At the dawn of 2014, another band member leaves (Răzvan Moca), but the band also celebrates the arrival of two new members: drummer George Chereji and guitarist Ritchie Bordea, respectively, with whom Vespera takes a step further stylistically speaking, thanks to Ritchie’s fresh and bold musical style. For the past three years, the band has performed in dozens of concerts and Festivals throughout the entire country, among which Peninsula, Artmania, Rock in Parc, and Maximum Rock Festival, sharing the stage with famous national and international bands, such as The Animals, My Dying Bride, Leaves'' Eyes, 69 Eyes. Also, in 2013 the band wins the first place in the metal category of Rock’N’Iasi Festival. In the following year, the band performs at the We Are Rockin The City Festival in Cluj-Napoca, Posada Rock Festival, Rock’N’Iaşi, Celebrating Finland, Rock for Livia, the Waken National Final (runner up), and many more. In the March of 2015, the band’s line-up changes again, when frontman Dudu Isabel leaves the band and Teodora Bârla takes his place, whom after a three years of absence takes back her role in Vespera. The band members are currently working on a new album, more public appearances, pursuing the promotion of their musical style and message. Current line-up (2015): • Teodora Bârla (vocals) • Dorin Panduru (guitar and vocals) • Ritchie Bordea (guitar) • Johann Hentz (bass) • Andrei Călbăjos (keyboard, synth, samples) • George Chereji (drums) Contact: vespera_ro@yahoo.com www.facebook.com/vesperaromania www.youtube.com/vesperaromania